Wow I can't believe that I am actually posting this on the exact day that it should be posted on!

I hope everyone remembered to wear green today!

If you have read my previous post you already know that my St Patricks doodads actually made it in the mail, but the not so good news is I am not sure if all of them made it on time. I have really enjoyed making the cards with my die cuts but the bad side is that the inside of the cards are completely blank. When I see a blank piece of paper I feel the need to fill it up so it is a bit overwhelming thinking we have to come up with so many words to do it, so we both had a hard time trying to get motivated to fill them all out. I have to admit my hubby is quite creative when he puts his mind to it but after he works all day his brain is tired so he doesn't want to think at night. We have been working at the casino doing bands almost every weekend including Thursday Friday and Saturday nights and we dont get home till 2am then hubby has to be up super early on Sunday to get to church to play on the worship team so we haven't gotten much done on the weekends either. The cards and doodads were actually done a couple weeks ago but it took us a bit to fill them out. I guess the important thing is that they at least made it in the mail even though they may be a bit late!

As I have mentioned before it is getting harder and harder to come up with new ideas for my holiday cards. I have done St Pats tatting cards 5 times now and I have run out of patterns and there are only so many different ways to do clovers. I was on the hunt to try to come up with a rainbow and wasn't able to find one so I decided to try to come up with a pattern of my own. After several tries I came up with one that actually seemed to look ok. I also had to make the pattern for the beaded  horseshoe. I really dont love the way they look but I hope they at least look somewhat identifiable. 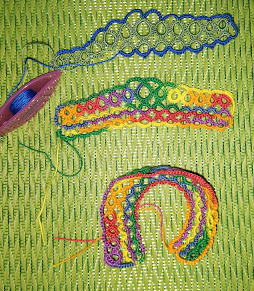 These tended to curve inward all on their own so I didn't starch them. I am not really sure how they are going to re-form once they have been flattened in the envelope and then abused by the mail system.  I am hoping they will be ok. I used Aunt Lydia’s thread called mexicana . The thread is what actually gave me the idea for trying to come up with a rainbow. This thread was great to work with so I may have to come up with another idea to use it again!  I made 12  of these doodads and cards but so far I have only sent 8 of them out. We were hoping to have friends over this week and give them in person but that didnt happen and we have to work the next several days at the casino. 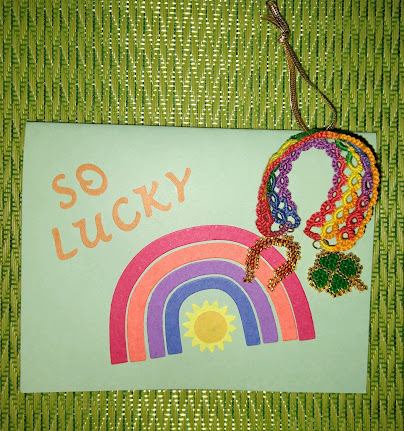 Did I mention my hubby is silly and creative? I decided to share a couple of his cards with you so you can share in the awesomeness! 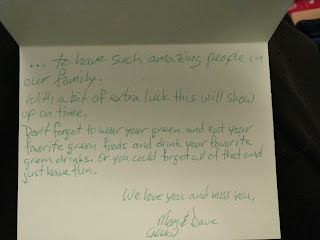 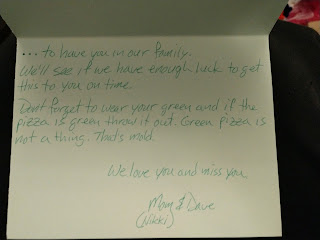 So the good news for the next holiday (which is Easter) is that I have the doodads already done. The silly bad news is that they have been done for over 2 years. Looking back I have only made 2 Easter cards and I am not really sure why I have so few. I know part of the reason why these didnt get sent out in 2020 is because we were all in the beginning of covid lock down. And last year Easter was super early and came right on the heels of St Pats. Anyway, I have already started to work on die cutting the cards out so please keep your fingers crossed for us that we actually get them in the mail in a timely manner…nay, maybe even early!

Blog I find inpiration from