I don’t think I even want to bother counting the days I have been social distancing/self quarantining in fact I would be hard pressed to even guess what month we are in. I haven’t had much luck in finding a job. Most days I have my hands full just trying to convince myself things are going to be ok. I have been trying to keep my mind occupied with doing craft projects, but I have still been having massive problems trying to start new ones. I have been doing quite a bit of cross stitch, a bit of tatting but not a whole lot of beading and way way too much time on pintrest looking for patterns. I had done a cross stitch for one of my grand babies and had totally forgot about that until I ran across a picture of it. Since then we have had 2 new grand babies, so I figured I better get on the ball and get a couple more done for the rest of the grand kids. For a couple of them I just ordered a kit but some of them I found patterns on pintrest because hoarder me has a stash of fabric and thread. The problem with some patterns is that you have to pick your own colors and on some of them I had to change a couple things on the pattern, so I have spent hours and hours looking for patterns, colors and making changes.

I can’t post about the cross stitch stuff yet because they aren’t all done yet and I don’t want to spoil the surprise but I can post about my last tatting project that got handed out. Since it is such a long time until the next holiday I wanted to come up with another project to do to let people know that I am thinking about them.  Since nobody is able to take vacations it got me to thinking about the last vacation we had been on and that would the cruise that my parents treated our whole family on 3 years earlier in September.  I had run across a cute dolphin pattern that I figured would remind everyone of the days we spent together watching the dolphins that played around our ship. 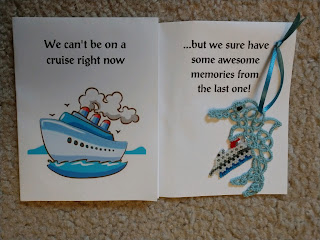 The pattern is one by Jane Eborall and you can find it here.  She has some really fun patterns on her site, if you haven’t visited it yet you should check it out! This is a fun pattern to tat, it has lots of split rings which I have found to be fun to do. It also has a down facing picot that I had never even heard of. I sure wish I had know about these earlier because I know I have done several projects that would have looked better had I know about them. This pattern also has the option to do a split chain in a couple of spots but since I had not tackled those yet and on this particular pattern you have to also attach it to an anchor picot on a helper item I decided to leave those out.

I first tried these in gray but they were so small and the little ships looked huge  that I decided to try them with a little bit thicker thread. The grey one is artiste #10 called cloud and the blueish one is J&P Coats knit cro-sheen called aqua. 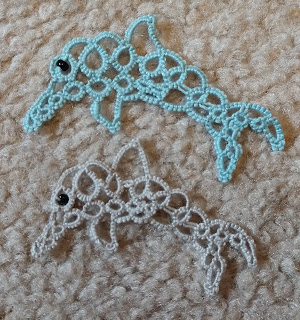 The best part of these little doodads is that I got to hand deliver several of them. I ended up making 9 complete ornaments  but actually only needed 6 of them. Me and the hubby got to take a trip back home and hand delivered them to the family members that still live there. This happened in September it has just taken me a bit to get these posted. With any amount of luck I will get the next holiday motifs out in time!

Blog I find inpiration from